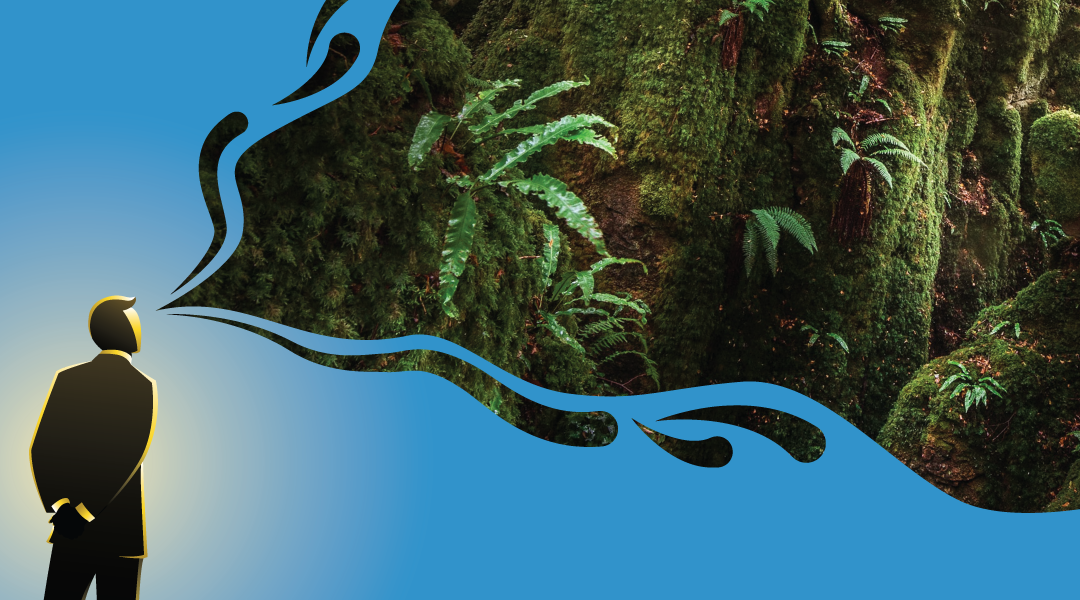 In 1985, a “Far-side” cartoon depicted a dinosaur at a podium addressing a group of fellow dinosaurs. The reptile opined: “The picture’s pretty bleak, gentlemen. . . The world’s climates are changing, the mammals are taking over, and we all have a brain about the size of a walnut.” Like so many of Gary Larson’s brilliant one-panel creations, the cartoon strikes the funny bone because it lampoons a core truth of our own human situation.

This truth, however, bears further examination. Are our brains figuratively “the size of a walnut,” confining us to paths that lead towards catastrophe? Or, can we free our thinking to sense broader truths and opportunities, to envision alternative stories of meaning, success, and solutions to our present predicament? Larson’s cartoon reminds us – goads us! – to consider, anew, our human relationship to the lands we inhabit and to Earth as a whole.

In the past few decades, we have become aware of many ways in which our own human future might be bleak. Concurrently, however, we see glimmers of hope – all manner of new energy and efficiency technologies, terms like “sustainability” gaining traction and new insights into ourselves and our planet.

Modern science now mirrors what our ancestors all around the world knew – that human society is a seamless continuum of a living planet. Earth system science tells us that everything at Earth’s surface (rock, water, air, and organisms) has been co-evolving in response to a major forcing factor over billions of years – the steady increase in luminosity of the Sun. Although latecomers on the scene, we Humans are no less a part of this living system than any other organism. We are unique by virtue of the conscious knowledge of ourselves and Earth as a whole. Our level of self-awareness and awareness of time to the extent of understanding our own eventual death emerged from Earth’s Life just as surely as our opposable thumbs. Thus, we could say that Earth is now conscious of ourself. Through us, Earth makes conscious decisions about ourself.

It might be of interest to know that “Geo,” the familiar prefix for science and math not only means “Earth,” it is derived from “Gaia” the Greek Goddess of Earth. The metaphor “Gaia” was attached to the science of Earth systems decades ago and the story of this came to be is fascinating and instructive. In the 1960s, British scientist James Lovelock was tasked by NASA with determining whether or not there was life on Mars. He concluded Mars was lifeless, but in the process, came to an astounding awareness of Earth as a physiological system, alive in some sense! When Lovelock moved back to England, after his work with NASA, one of his neighbors was William Golding, author of Lord of the Flies. Upon hearing Lovelock’s ruminations about a living Earth, Golding urged his friend to call his scientific idea “Gaia,” after the Greek Goddess of Earth, to honor the fact that Western science was now rediscovering what ancient Western Culture held sensed mythically – that Earth was alive and that we are a part of her life.

In the midst of the great challenges we face today, we need a productive and conscious co-evolution between science and metaphor to guide us. We need something to inspire us, to keep us inspired and to serve as a “clutch” to make a smooth transition between two ways of being. Just as a manual-shift car sputters and dies if the clutch is not employed, our efforts towards living sustainably on Earth stall out if the ideas we need do not mesh and catch hold.

That’s why I think it’s time to start thinking about ourselves in a new way – as Geo sapiens, the Earth-wise Human. Since Carolus Linnaeus, the father of modern biological classification named us Homo sapiens in 1758, we have learned a whole lot more about ourselves and our relationship to Planet Earth. We can now see ourselves as Geo sapiens – Earth’s consciousness – and we can adopt a sense of responsibility to use that consciousness in ways that are healthy for the living systems upon which we depend. This will enable a smoother transition between today’s destructive perspectives and practices and new ways of living that fit in with Earth’s living systems and natural limits.