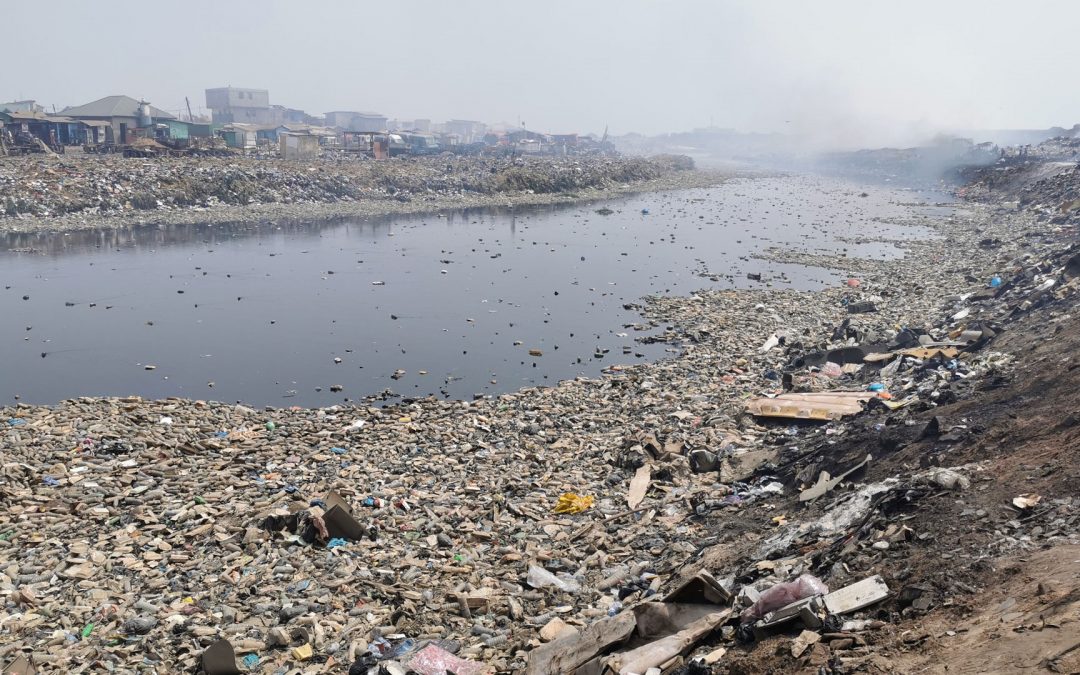 How Did We Get Here?

Plastics, or synthetic organic polymers, did not exist on our planet until 1833 when French chemist Henri Braconnot synthesized nitrocellulose, a long chain molecule. This new substance was a curiosity at first with no apparent use, but in 1868 the Hyatt brothers began manufacturing it in America as a substitute for ivory in billiard balls. For the first time, humans could manufacture products without using natural resources like wood, steel, stone, or elephant tusks, and the first plastics on the market were touted as being environmentally friendly. Twentieth century chemists continued to invent new kinds of plastics in their labs including Bakelite (1907), Polyvinylchloride or PVC (1912), Cellophane (1913), Plexiglass (1924), Polyethylene (1933), Polyurethane (1937), Nylon (1938), Polystyrene (1944), and Polypropylene (1954). World War II drove a 300% increase in plastics production for military purposes, but this was still miniscule compared to what was coming. The consumer markets did not exist yet.

All that changed in the 1950s when the consumer plastics industry took off in America, along with other chemical industries that marketed synthetic products like pesticides and herbicides, and food additives such as artificial flavorings and colorings, and preservatives. Massive advertising campaigns using TV, radio, newspapers, and magazines urged post-war American consumers to embrace Better Living Through Chemistry, Dupont’s tagline, and buy all these wonderful new products. Little did we know back then that our environment was being flooded with carcinogens!

Disposable products were also promoted as essential for the good life, and as Americans fell in love with throwaway plastics the markets began to explode. In 1950, 1.5 million tons of plastic was produced in the world – a staggering number! But since then, the global production of plastic has grown exponentially at a rate of 8.5%. That means we have doubled the amount of plastic we manufacture every 9 years. We now produce about 330 million tons of plastics every year, and it continues to increase. Almost all of that ends up getting thrown away, in one way or another, to become plastic pollution.

There is no “Away”

Humans did not understand in the 1950s that there is no AWAY when we throw things away. Yes, we can temporarily make things disappear into a trash truck or landfill, but it’s not really gone. We now realize that the entire planetary system, made up of the atmosphere and oceans, and the land masses and the plants and the animals, is one whole, interconnected system on the surface of a perfect planet suspended in cold empty space. And this is our only planet. Everything we thought we were throwing away is still with us, and it’s coming back to haunt us. But humans are now beginning to acquire a planetary perspective that was inconceivable seventy years ago, to see things on a bigger scale, both in time and in space. We are coming to understand that to have a positive future on this planet we must emulate the cycles of Nature and replace our linear civilizational model of extract -> manufacture -> sell -> use -> throw away, with circular models that do not deplete and pollute. 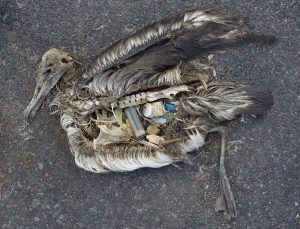 We are also grasping the sobering reality that plastic is a “forever” substance that does not biodegrade and has no place in the natural cycles of our planet where one organism’s waste becomes another’s nutrient. It has simply been accumulating in the planetary ecosystem since the 1950s, more than 8 billion tons of it by now, spreading everywhere. Researchers now report finding microfibers of plastic in high mountain snows from the Himalayas to the Rockies, and these fibers are also showing up in municipal water supplies, the result of upstream washing of synthetic clothing containing nylon, spandex, lycra, polypro, polyester, etc. – yes, these are plastics too! Plastic fibers are also found in tissue samples from humans and animals everywhere. And, as everyone today knows, the oceans are filling with plastics, from massive floating garbage patches to microparticles in animals throughout the marine ecosystem. Some marine animals eat chunks of plastic and die slowly of starvation, like the unfortunate albatross here.

But what about recycling? All of my household plastics go in the recycle bin and that gets picked up every week and taken to our regional recycling center. So, I’m recycling all my plastics, right? Well, … no. It turns out that to actually recycle a plastic bottle – to make it into another plastic bottle – is very difficult by the nature of plastic molecular structure. You can’t just melt down plastic to make new things, as you can do endlessly with glass, aluminum, and steel. Furthermore, the plastic waste stream has many different kinds of plastic, from bags, straws, and bottles to utensils, furniture, and diapers. Most recycling centers are just sorting facilities where certain kinds of plastics are separated out and shipped to other facilities where recycled products are actually made, while the rest of it ultimately makes its way back to the waste stream. All to say that our current efforts to recycle plastic are very limited and not what we’d like to think. 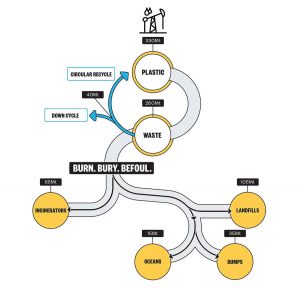 Image from Frontiers In Marine Science.

As this graphic from a 2019 article published in the journal Frontiers in Marine Science illustrates, 88% of our plastic is being pumped into the biosphere in four ways (yellow circles). The other 12% (blue arrows) is diverted from the burn, bury, befoul waste stream through either circular recycling, or by downcycling.

A common example of downcycling is shredding plastic bottles and processing that material into carpeting or fleece fibers, and these products can later be downcycled into plastic lumber products. This is a relatively permanent, stable, and useful destination for plastic waste. Building materials made of shredded plastics mixed into concrete are also coming onto the market, along with plastic-infused road paving materials.

But in the big scheme, we are still dumping 260 million tons of plastics into the biosphere every year. The global flow of plastics is largely linear, starting with the extraction of petroleum used to make plastics, and ending with incineration, landfills, dumps, and the oceans. Every year we produce more, use more, and throw more away.

What Can We Do?

Is there any hope for turning this around?

The Plastics Campaign is our first Campaign and we are counting on the energy and wisdom of our community to design and grow it. Throughout the upcoming month, we will be suggesting ideas and inviting those of you in the Planet Online Community to help us shape a plan for collective action. We are looking forward to discovering what wants to emerge!. Also, you can always send us your ideas and questions at staff@planetproject.io. We will be collecting and compiling your ideas and contributions in a list that we’ll keep on our new Plastics Campaign page.

For a deeper dive into plastics and plastic pollution, check out our Change Agents and Positive Culture databases and be sure to select the Plastics filter.

The Plastics Campaign won’t be over until we see a clear reduction in global plastic pollution. Together, we’ll continue to grow and spread the Plastics Campaign, and as a starting point here are a few ideas for actions we can all take right now:

THE PLASTICS CAMPAIGN MENU OF ACTIONS